America, time for some #PatriotRage! #AngryVillagersApp TIME TO FIGHT! (If you plan to watch the private mass viewing of THE PATH TO 911, yes, the one @HillaryClinton tried to censor, you must have this app 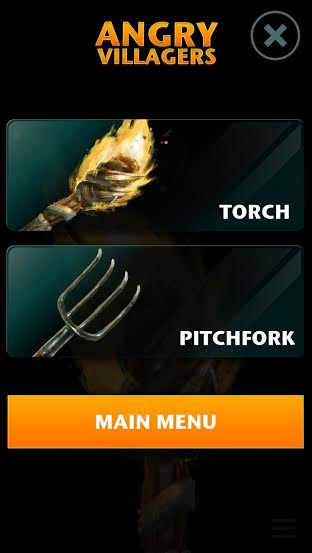 They're coming, be prepared and wipe them OUT!

Read all about it at WORLD NET DAILY!

TIME FOR 'PITCHFORKS AND TORCHES'?

A new smartphone app is providing a way for conservatives to irritate liberals who try to demean tea party members as "peasants with pitchforks and torches" by giving them those very tools.

Sparked by extreme rhetoric linked to Hillary Clinton’s previous presidential campaign, “Angry Villagers” is produced by Resa LaRu Kirkland, a contributing writer for WND on military issues such as homosexuals in the military.

Kirkland is also a military historian and the author of the upcoming “Forgotten Warrior” series on men of valor from the Korean War.

The app, which is available from Google Play and iTunes, gives people the choice of having the phone display either a flaming torch with crackling noises from a realistic looking flame or a pitchfork which can be spun around or used to “poke” someone around you.

Kirkland said the reason for the app is “you can’t be an angry villager with a flashlight.”
The idea dates to the early days of the tea-party movement.

“When the tea party first took off in 2009 and Hillary was running for president someone said our opposition to her was like a bunch of angry villagers running around with torches and pitchforks,” Kirkland explained. “A friend then said we could use our phones as a flashlight to symbolize our anger. I said, ‘You can’t be an angry villager with a flashlight.’ And that’s how this idea was born.
“I then sort of put it on the shelf until Hillary was going to be running for president again. Now that she has announced her candidacy, it’s time for us to break out our torches and pitchforks. 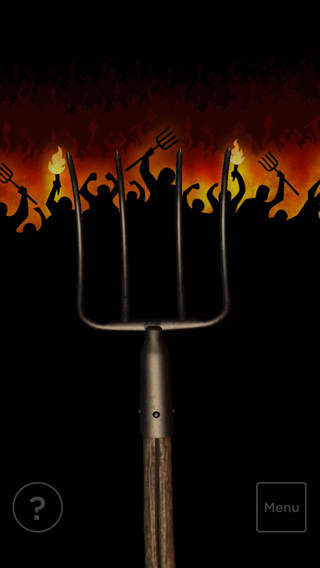 Get “Hillary Unhinged” and see the real Hillary in “this raw and humorous collection of quotes that pitilessly underscores her hypocrisy.”

“Anytime you see an angry mob throughout history or portrayed in the movies they don’t have flashlights, they have torches and pitchforks.”

Kirkland said another purpose of the app is to tweak the sensitivities of liberals who frequently are offended by the smallest slight.

“One of their favorite ways of trying to denigrate conservatives and tea-party members is to refer to us as peasants with torches and pitchforks. I decided rather than paint us with a derogatory term why not turn it around on them and have some fun with it at the same time.”

She explained it’s a good way to stand up to liberal bullies who try to shut down conservatives in public by “stabbing” them while showing some humor at the same time.

Kirkland said when she first started pitching the idea she was stunned at how some people appeared so thin-skinned.

“There were people that actually wrote to me who were somewhat squishy on the conservative movement, and I wondered if they weren’t really closet liberals who said, ‘Are you sure you want to advocate such violence?’ I said to them: ‘OK, you’re getting forked first. I can’t believe you just said that. Are you that dumb?’”

Kirkland told WND that visitors to her website can also vote for a list of individuals they would like to poke. Once she gets a significant number of votes, she intends to give people the option of poking several different people.

“I am not just looking for people to vote for politicians. It can be anyone you think should be poked for violating the Constitution. It could be from Hollywood, a business owner, a politician or anyone else.”

Kirkland’s app would not be the first time conservatives have taken something meant to be demeaning and turned it into a source of pride.

In 2002, Solomon Little Owl, a student at the University of Northern Colorado in Greeley, created an intramural basketball team called the “Fighting Whites.” The team’s logo featured a white man in a suit and tie with short hair. Little Owl said it was intended to cause white people to experience discrimination by being a team mascot. The team’s slogan was “Everything’s going to be all White.”

However, the attempt backfired as white residents, instead of being offended, rejoiced in the characterization, bought T-shirts in droves and said the slogan was a source of pride.

Team members ultimately complained that people didn’t respond to the mascot as intended.

My app, get it for 1.99 on iTumes and Google Play, coming for Amazon

Because you can't be an ANGRY VILLAGER with a flashlight!!!

Blog some more. This is really good.

Thanks! How'd you find this? Also my articles and such are everywhere, easy to find if you connect with me on LinkedIn, Twitter, and Facebook - WARCHICK

Would it be OK if I cross-posted this article to WriterBeat.com? There is no fee; I’m simply trying to add more content diversity for our community and I enjoyed reading your work. I’ll be sure to give ybou complete credit as the author. If “OK” please let me know via email.

My name is WARCHICK, I write Military History and conservative commentary, and...

...I STAND WITH ISRAEL

From THE NAKED COMMUNIST, by Cleon W. Skousen

WARCHICK is EVERYWHERE, and she's watching you! mwah hah hah!

Read her and Heed her at all these smart places! Visit Smart Girl Politics

FORGOTTEN WARRIOR: Twice In One Day -- Video Proposal, get involved, spread the word!

My Big FAT Greek salute for my friend Phaedon

WHEREVER I STAND MY HEART AND SOUL ARE WITH GREEKS!

Yup, WARCHICK's on SKYPE! You can sign up for free and add her to join in conference calls, IM's, or even quick--I mean it!--phone calls and video calls. Skype name: WARCHICKUSA Add me by searching for my email resalaru@gmail.com, my name, or SKYPE name. You know you want to...

WARCHICK on Milblogging.com!!! Your prayers have been answered!!!

THE WARRIOR SONG, Hard Corps version...GOOD NIGHT CHESTY, WHEREVER YOU ARE!

FIGHT FOR ME, by Citizen Reign...just awesome

Because the American Constitution--the foundation of this nation--is perfect. Since the foundation is solid, we need a RESTORATION, not a REVOLUTION. A REVOLUTION is only necessary when the core is rotted through, and that is not the case here.

1. We stand with Israel because Israel is right. 2. We stand with America because America is free. And God stands with us so long as we continue numbers 1 and 2. Mess with us and you mess with Him. You might want to do a little reading up on His attitude toward those who stand against His beloved Israel, just in case there's any doubt. Israel (Jews) and America (Joes) are united to the end. If you can't handle that, take it up with our leader. Just kneel and wait...He'll be with you shortly.

We wait for the day that North Korea is freed from that stunted little Man-wanna-be in platform shoes and electrified hair. A butt-load of guns dropped all over North Korea should do the trick. Merry Christmas early, people of NK!

God, freedom, guns, and dead commies...puts the red in my neck, the white in my trash, and my foot in the ass of commies, hippies, femmies, and Islammunists.

Man I love this Country! Here's to one helluva RESTORATION!